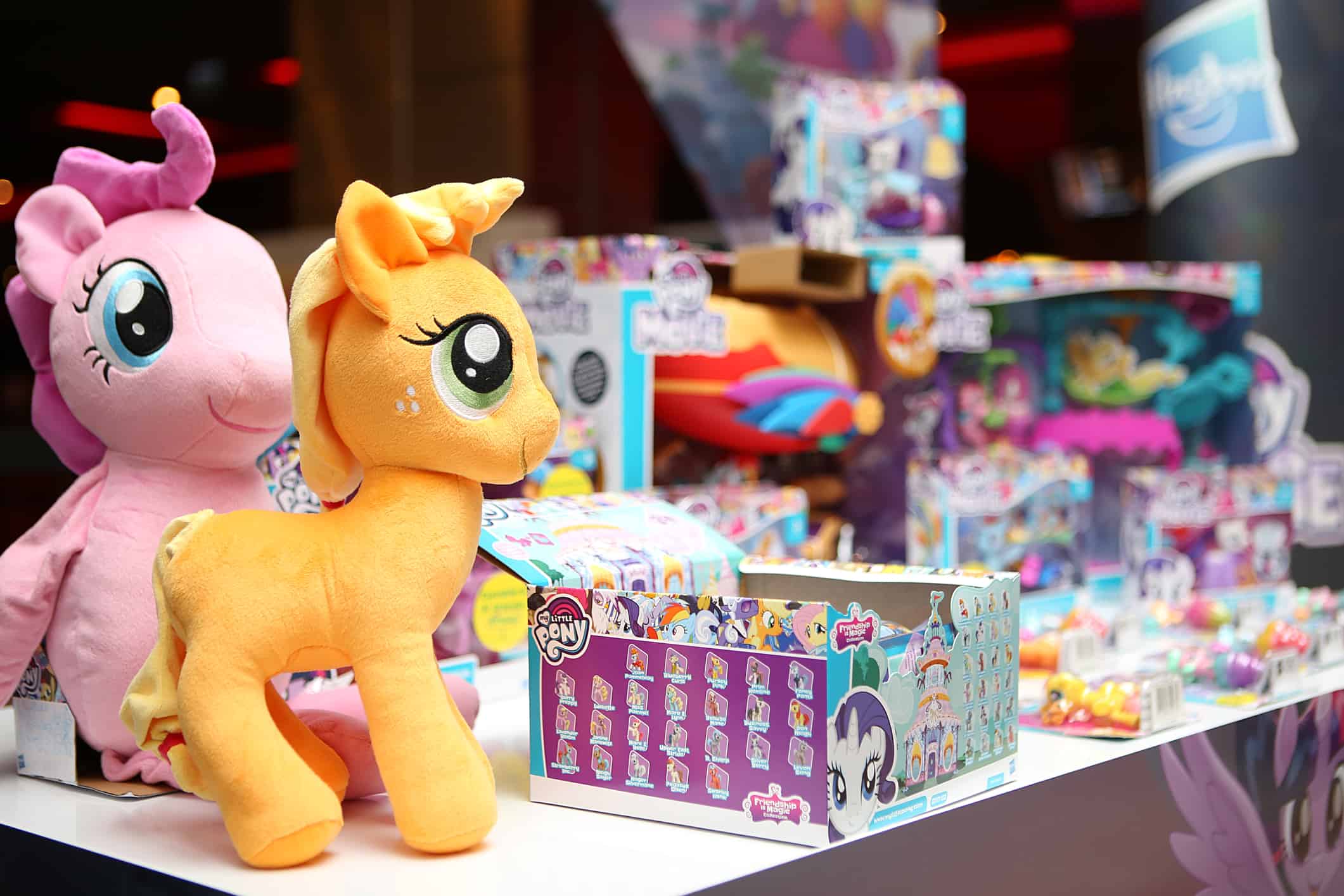 10 My Little Pony Toys: Best Gifts for Girls and Boys of Different Ages

Suppose you’re a parent of girls between the ages of one and 10. In that case, you probably already know all the characters from one of the most popular television series, My Little Pony, as well as their habits, voices, colors, and probably all the other things that relate to them.

Do you recognize yourself as such a parent? I know almost everything about them because my house resembled the world of “My Little Ponies” at one time. From each character’s plush toys to clothing, dishes with their image on them, bedding, it was all purchased for my girls – the number one fan of these funny ponies – for various holidays.

So, I can tell complete confident that my review of My Little Pony toys is almost a professional expert job!

If you’re getting to the point where your child has just started talking about My Little Pony, here’s a brief description of these toys.

What are My Little Pony Toys?

Iconic pony toys, introduced in 1983, sparked the worldwide phenomenon known as My Little Pony. Ponies made their big-screen debut three years later with the release of My Little Pony: The Movie, which featured the voices of Danny DeVito, Madeline Kahn, Cloris Leachman, Rhea Perlman, and Tony Randall, among other celebrities.

A human girl named Megan, her talking pony friends, and a dragon friend named Spike were the focus of both My Little Pony: The Movie and My Little Pony: Friendship Is Magic. They lived in Dream Valley and were constantly on the lookout for witches and goblins because of the nature of their occupation. Earth, Pegasus, and Unicorn Ponies would become a recurring theme in the following series.

Read more about the history of My Little Pony toys HERE.

With the new Twilight Sparkle plush quad from Huffy, your child will be transported into the world of My Little Pony! This 6-volt electric ride-on toy is made of soft materials and has glitter wings, and it provides hours of entertainment. This adorable ride-on toy is recommended for children between the ages of 1.5 and 3 years old, with a maximum weight of 45 pounds. Riders can go up to 1.5 miles per hour with ease by pressing the foot pedal on the footrest, which is conveniently located for toddlers to reach.

Babies and toddlers will be able to bring a cuddly, soothing companion for bedtime or anytime the baby wants to cuddle up with someone. With a gentle squeeze of her tummy, this adorable good-night friend will come to life and begin playing lullaby music for you. It’s so much more enjoyable to have Rainbow Dash by your child’s side during sleep time!

Rainbow Dash Glow Pony Toy plush plays a total of 6 sweet tunes. With a gentle squeeze of her tummy, this adorable good-night companion will come to life and begin playing lullaby music.

With this toy, your child can enter the magical world of My Little Pony! Your kids will learn about Twilight Sparkle, Pinkie Pie, Rainbow Dash, Fluttershy, Rarity, and Applejack, as well as other characters!

These close friends are always by each other’s side. Your kid will come along with them on their adventures and fun! Ponyville, the royal city of Canterlot, and the entire continent of Equestria are all worth exploring, and kids will be introduced to even more pony friends!

The My Little Pony world can be recreated at home with imaginative playsets. Pony toys in this colorful set have great features such as long, colorful hair for styling and accessories for dressing up and playing!

This set will be the best gift for My Little Pony fan.

The little girl who receives this lovely Easy to use set gift set will be able to create her very own My Little Pony necklaces with the help of this kit. Girls can combine and match the vibrant beads and character charms to create various looks time and time again! Everything fits neatly inside the plastic carry case, which has a sturdy handle for portability and convenience while on the go.

Princess Pipp Petals is now available in this beautiful and colorful activity playset. Princess Petals is a pop star princess who is both fashionable and talented. Crystal Adventure Princess Petals will allow you to discover the magic of surprises. It contains a Princess Petals pink pony figure with molded purple hair in her signature wavy style that is 3 inches tall and articulated.

On one side of the figure is a music note, Cutie Mark, inspired by the character. The reusable crystal-shaped container can be split in half to reveal hidden story elements and customization options. Includes sticker sheets and charms for personalizing the pony and her accessories and instructions for assembly. For children, there is a friendship bracelet, and a temporary tattoo included. You can also find Crystal Adventure Zipp Storm, Sunny Starscout, and Izzy Moonbow toys in addition to these.

For children who love creativity and modeling with clay, this set will be the best gift! Your kids can create their very own Ponyville world in their own home! A child can make all kinds of My Little Pony friends out of a rainbow of nine different Play-Doh colors, including Earth ponies, Pegasus ponies, Unicorns, and Princess ponies. Or create their own versions of their favorite characters from the hit cartoon, such as Princess Twilight Sparkle, Rarity, Rainbow Dash, and others!

Girls can make ponies out of the four pony bases and book-molds and then use the extruder to give them beautiful rainbow manes to finish them off. Cutie marks and other accessories can be used to make unique ponies.

Complete set of My Little Pony party supplies that will impress your family and friends.

The cake topper is delicately crafted, and it will enhance the creativity of your cake decor. It is ideal for a birthday party, a fun birthday party, themed baby showers, garden parties, and various other party scenarios.

Iconic My Little Pony Party Supplies like a colorful banner, a bouquet of bright birthday party balloons, and a vibrant cake topper, all meticulously created for your children’s happy birthday, will ensure that your party is a big hit and a lot of fun. It can also assist you in lighting up a beautiful night and spending unforgettable moments with family and friends.

These 3-inch Princess Pony toys are covered in glitter, allowing them to shimmer and shine as children interact with them during playtime.

Style The beautiful glitter-streaked hair on these princess dolls! These princess Pony dolls have various hair colors, including pink, purple, blue, and blonde, to choose from.

Young My Little Pony Friendship fans are Magic television series and the My Little Pony: the movie will adore this 3-in-1 Pony pack, which makes an excellent birthday gift!

Make the 9-inch Sunny figure roller skate forward or spin around in circles using the included microphone as a remote control.

The toy makes noises reminiscent of the My Little Pony: A New Generation movie and hums parts of her song “Gonna Be My Day.” Children can use the cordless microphone to perform.

The interactive pony comes with over 50 different sound, light, and movement combinations, allowing children to imagine adventures and stories with their favorite characters.

A child can decorate the figure with the stickers that are included to give it a unique appearance. Soft pink hair, a light-up Alicorn horn, and moving wings, all inspired by the movie, distinguish this figure.

Kids can dance to the music or play the “Sunny Stop” freeze game using the microphone tool. This is an excellent gift for girls and boys ages five and up in 2021.

Beep, beep, beep! Pinkie Pie is on her way into Ponyville, so keep an eye out for her. To take the scooter for a spin, place the pony figure inside and use the butterfly-shaped remote control to steer the scooter forward or make it a spin. This remote-control vehicle can move forward and spin around. There’s also a horn button on the remote control that can be used to clear the way for this adorable pony figure who is riding a scooter. Let’s get started!

Pinkie Pie is well-known throughout the pony world as a pony who is constantly on the move! Pony figure stands 6 inches tall and is ready to have some fun on her zippy, colorful RC scooter. Her pretty pink hair is also fun to style on this larger-scale pony figure, which is a bonus. Discover Cutie Mark Magic with the help of this cheerful Pinkie Pie RC Scooter, and imagine Pinkie Pie scooting around Ponyville on her RC Scooter! What will be the outcome of the adventures? It is entirely up to your child imagination!

Twilight Sparkle is a hard worker at Canterlot High School, where she learns about friendship along the way. She also has a fashionable sense of style. This 11-inch Twilight Sparkle fashion doll is dressed in a stylish, preppy outfit that is perfect for imagining her reading in the library. She was inspired by the entertainment industry. The pattern on her skirt is a representation of her cutie mark!

Finish off her look with her signature glasses accessory and a pair of purple shoes from the same collection. She has seven points of articulation that allow her to imagine stories filled with friendship! Also keep an eye out for other My Little Pony Equestria Girls collectible dolls. (Each piece is sold separately.)  In the world of the Equestria Girls, the strength of friendship is multiplied when it is shared! It is the trademark of Hasbro to use the name My Little Pony Equestria Girls and all related characters.

A coloring and activity book (96 pages, cover may vary), more than 400 MLP Fun Stickers, ten Crayola crayons, and six Unicorn Stampers are included in the My Little Pony Coloring & Activity Book Set. A single book (96 pages, cover may vary), measuring approximately 8″ x 10.75″, containing My Little Pony coloring and activity pages and stickers. More than 400 stickers featuring My Little Pony characters can be found in the MLP Fun Stickers collection. A must-have for fans of My Little Pony. A set of six unicorn stampers that are factory sealed come in assorted colors, measure 1.5″ x 1″, and are non-toxic. They are designed to encourage self-expression and imaginative play.

Best Baby Shark Toys: Gifts for Kids of All Ages in 2021