Best Dinotrux Toys Your Kids Will Love in 2022

If your child loves to play with toy cars, and no less than cars love dinosaurs, then your family probably knows about the famous cartoon “Dinotrux” and dinotrux toys, which is so popular among kids.

In case you have heard the name, but have not figured out what it is, in our article you will learn why children are so attracted to these relatively new, but already very popular toys.

The cartoon is based on children’s books, which tell of a prehistoric period of life that was inhabited by creatures similar to dinosaurs but were a hybrid of the animal dinosaur and construction machinery. All of these animals are called Dinotrux. They live in their own world, playing, building, traveling, and escaping from various troubles.

Each character in the “Dinotrux” cartoon series has his own personality.

The main character is Ty-Rux, a giant Tyrannosaurus excavator. Ty-Rux has a brave and kind heart, and has friends Chameleon Revvit that can be a drill, Brachiosaurus Skya that can be a crane, Ton-Ton is a dump truck, and Garby is a bulldozer.

The “Dinotrax” series tells how this friendly company of dinotruxes is constantly getting into various adventures. They help each other in prehistoric reality and confront the giant and dangerous D-Structs.

Now kids can collect all the half-dinosaur, half-construction vehicles to create their own prehistoric Dinotrux world. Your kids will have a great time using their imagination to recreate scenes from their favorite episodes of the show.

Ty-Rux is the leader of the Dinotrux team. Ty-Rux, a hybrid of a red Tyrannosaurus rex and a megaton excavator, can erect or destroy structures in minutes. This Dinotrux with its bright red coloring can become the favorite toy of a child of any age. Even a three-year-old child will not be hard to assemble and disassemble the toy.

Ty-Rux has a destructive ball-shaped tail that swings,  a movable jaw, and a rock mount.   Thanks to the movable caterpillars, this toy can be moved around on the ground outside.

Ty-Rux comes with a remote control in the form of Ty-Rux’s best friend Revvit! Of all the modes available, we liked the search mode best. Simply plac  the remote eight feet away from Ty-Rux and watch as he scans the area looking for his buddy Revvit! Ty-Rux can also dance, move forward and backward,  and swing his wrecking and breaking ball. Over 40 cartoon sounds and phrases will have your child thrilled!

Revitt is Ty-Rux’s best friend, who never fails and gives smart advice. Among all the inhabitants in the show, he is considered the smartest Dinotrux. The reptilian chameleon Revvit makes unique sounds and phrases from the show. The tongue of the toy is equipped with a real measuring tape.

Interchangeable nozzles fort the rotating drill head are included in the set. The extra attachments conveniently attach to the back of the toy, which will prevent loss.
The wheels make it easy for your child to move the toy forward and backward.

Ace is a reptilian lizard, but she is a Dinotrux at heart. It is a hybrid of a lizard and a crescent wrench. Ace rolls across the floor with a metal ball. Children can play pretend games by acting out scenes from the show. Moreover, they can develop their imagination by inventing their own adventures.

As newborns, they are playful and easily distracted, painting and polishing everything they see and chasing smaller pieces, such as dragonflies. Tortulas are very talanted babies! They create wonderful pictures with their colors.

Like the previuos models of Dinotrux Toys, it can roll on the floow with the metal balls. The size of this toy is quite small that makes it convenient for little hands.

The Ottos appeared on the show in March 2016 and immediately fell in love with their young viewers with their funny statements and slightly “shallow” wit. Nevertheless, they are very kind creatures.

Skye is a giant Brachiosaurus crane. Strong, sturdy, and two-bit sassy girl with a very high neck. She can see for kilometers and lift large loads with her crane-like neck. Litlle Dinotrux fans will adore this fantastic addition to their Dinotrux Mechazoic Era world collection.

Ton-Ton is a giant Ankylosaurus tipper. A very dreamy individual, always ready for action and looking for spicy adventures. He can throw rocks with the help of his body. Too hyperactive.
It can be used as a shovel by pulling out its tail, or by pushing its head down and causing the bed to raise and tilt upward for dumping action. 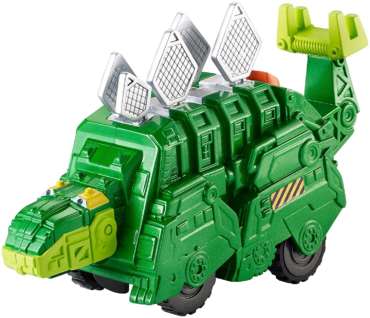 Garby is a giant Stegosaurus garbage truck. He is a big fan of eating rocks and especially ore, and nothing can stop him at the sight of food. He has a large number of powerful, aggressive stegosaurus scavengers that can be used to attack and injure their enemies. Graby Vehicle features rolling wheels for easy, push-around play and movements.

Dinotrux, the half-dinosaur, half-construction truck from famous Dinotrux Show, will provide your kid with hours of fierce entertainment! Featuring a wide range of sizes and shapes, this unique selection gives its little fans the option of selecting either their favorite Dinotrux character in mid-sized scale or a 2-Pack of smaller-scale Reptools!

All of the character vehicles have rolling wheels. To complete the prehistoric world of Dinotrux, children will want to collect as many as they can.

D-Structs is a Tyrannosaurus excavator. He considers himself the sole ruler of the crater where all the characters of the series live.  He hates Ty-Rux and tries to intimidate and subjugate all other inhabitants. He is very mean and likes to destroy everything.

With this set, your child can reenact scenes from the show and prove once again to D-Structs that Ty-Rux will always defeat the evil hero. Your child will love the gift, which includes two Dinotrux Toys in one package.

Having a hard time choosing one of the many characters? Then a set consisting of 7 figures of the most popular characters of this world-famous series will come to your rescue. Each figurine is approximately 5.97 x 13.989 x 4.92 inches.

You may also like another set with different characters included. It all depends on the taste and preference of your child. Ask your little one which of the characters fascinates him most before buying one of the bundle sets.

In addition to the wide selection of toys described in our article, this Rock & Load Skate Park allows Dinotrux fans to expand their prehistoric fun with this colorful and versatile skate park. With moving elements and accessories, your child can lead the narrative of this unique area while completing building tasks with all their favorite Dinotrux and Reptools characters!

Best Baby Shark Toys: Gifts for Kids of All Ages in 2021

10 My Little Pony Toys: Best Gifts for Girls and Boys of Different Ages

This website uses cookies to improve your experience while you navigate through the website. Out of these cookies, the cookies that are categorized as necessary are stored on your browser as they are essential for the working of basic functionalities of the website. We also use third-party cookies that help us analyze and understand how you use this website. These cookies will be stored in your browser only with your consent. You also have the option to opt-out of these cookies. But opting out of some of these cookies may have an effect on your browsing experience.
Necessary Always Enabled
Necessary cookies are absolutely essential for the website to function properly. These cookies ensure basic functionalities and security features of the website, anonymously.
Functional
Functional cookies help to perform certain functionalities like sharing the content of the website on social media platforms, collect feedbacks, and other third-party features.
Performance
Performance cookies are used to understand and analyze the key performance indexes of the website which helps in delivering a better user experience for the visitors.
Analytics
Analytical cookies are used to understand how visitors interact with the website. These cookies help provide information on metrics the number of visitors, bounce rate, traffic source, etc.
Advertisement
Advertisement cookies are used to provide visitors with relevant ads and marketing campaigns. These cookies track visitors across websites and collect information to provide customized ads.
Others
Other uncategorized cookies are those that are being analyzed and have not been classified into a category as yet.
SAVE & ACCEPT