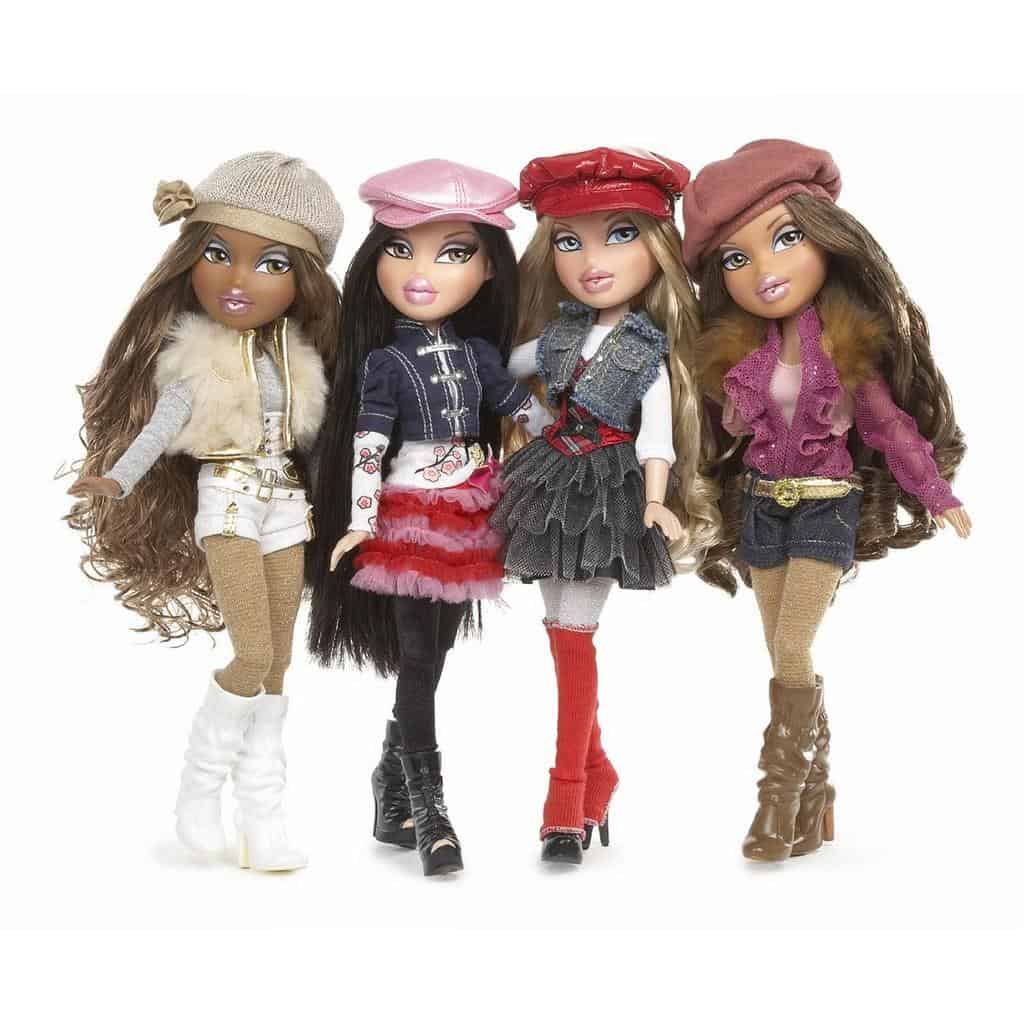 Bratz dolls, launched in 2001 by MGA Entertainment, presented a real challenge to Barbie, which has long been regarded as the gold standard in the toy market.

To keep with Barbie’s example, the Bratz brand has added many more products to its range, such as playsets, clothes, a girl’s clothing line, DVDs, games, movies, and a stop-motion series in 2015. The dolls have received several awards from the toy industry throughout the years. Let’s see why.

What are Bratz dolls?

Isaac Larian, C.E.O. of MGA, came up with the business idea to create a doll to get away from the image of Barbie. But he could not do it at once: all the samples brought to him looked very much like her.

In September 2001, freelance designer Carter Bryant showed him his version of the doll. Although Larian wasn’t particularly impressed with the toy (it had a disproportionately large head, puffy lips, and long feet), his high school daughter fell in love with it.

And then, the entrepreneur decided to give the toy a chance. And so, a series of Bratz dolls appeared.

How is Bratz different from Barbie?

Second, the dolls were positioned as a company of girlfriends where everyone was equal – MGA didn’t try to promote the idea that one character was smarter or prettier than another. The company emphasized that Bratz were girls who valued friendship.

When did the first Bratz dolls appear?

The first series of dolls appeared on store shelves in 2001 and included only four dolls: Yasmine, Jade, Chloe, and Sasha. Notably, the doll Jasmine looks a lot like the daughter of the company’s founder Isaac Larian. Gradually the number of characters grew to 70.

Bratz dolls were relatively inexpensive, instantly won the hearts of both children and adults, and in the first months of sales in ratings approached Barbie dolls. No one expected such success. And in 2002, at the toy show in New York, Bratz received the most prestigious American award, “Choice of the Year.” After that sales began in seventy countries around the world. Soon the Bratz dolls had girlfriends.

The Bratz dolls were made entirely of vinyl:

Competition between Bratz and Barbie

Bratz Dolls had expressive eyes, bright makeup, and fashionable clothes, went roller skating, went to discos, and dyed their hair – in general; they did all the things teenage girls do. However, Mattel, the makers of the Barbie dolls, sued MGA Entertainment, claiming that they were the only ones who owned the rights to this type of product and won. The court ordered MGA Entertainment to stop producing Bratz dolls and pay Mattel $20 million for copyright infringement. But in 2010, the U.S. Court of Appeals reversed this decision, recognizing that Mattel can’t own the rights to all the fashion dolls. And Bratz dolls continued to conquer new fans in different parts of the world.

One of the features of these dolls is that their shoes can be clicked off along with their feet. Of course, this is not very aesthetically pleasing. Still, this idea has several advantages: stylish shoes will never get lost, so you can easily put the narrowest fashionable pants on slender legs. In addition, the design of the feet makes the dolls stable; they can stand on their own, they do not need stands and supports. More modern models have an articulated design that bends the hands, elbows, and knees so that the doll can take any position.

Some moms are pretty negative to such dolls because of their bold makeup and informal clothing. It seems that the primary lifestyle of such dolls: party, disco, and beauty salons. But still, by the number of sales, Bratz dolls are slightly inferior to Barbie. In general, Bratz is popular with older girls aged 10-12.

So if you do decide to buy a Bratz doll, here are the best Bratz dolls to check before shopping:

To celebrate its 20th Anniversary, the company produced a limited collection of fashion dolls, all of which feature a 20 years’ motif. Each of these famous dolls’ prices starting from $45 on Amazon.com. Different accessories are included in each packaging.

If you agree that Bratz dolls look too extravagant for your child, this playset is a good solution.

“Toy of the year 2021” or why LOL surprise dolls are so popular?

Dolls and Accessories Toys: How Child Benefits from Playing With Dolls